Consumer surplus is the amount that buyers are willing to pay less than the amount actually paid, measures the benefit that buyers receive from a good in terms in which they perceive. For example , if John wants a product and that product is willing to pay 100. And when you get to the store is that the product is now on sale and costs 80. Then it is said that John has a consumer surplus of 20. Keep up reading to know more about consumer and producer surplus.

On the other hand the producer surplus is the amount you receive from the seller minus the cost of production. It measures the benefit of vendors participating in the market. This means that if a seller manufactures a product whose cost is 100 and sells it to 130. Then it is said to have a producer surplus of 20. In the case of that same product of cost 100, which in the market is offered to 90. Moreover the producer does not participate because it would not obtain a surplus.

In any economy the consumer and producer surplus interact with each other to form more complex systems of relationships. However in some cases the consumer is benefited. On the other notorious imbalances occur between the fair distribution of wealth between the buyer and the seller.

When a company tries to differentiate prices (charge each customer a different price for the same good or service) is what you are trying to appropriate the consumer surplus and get almost the full benefit. In order for this practice to be carried out. One must be very sure that there can be no trade between the different customers who pay different prices for the same good or service. Since they could trade between them at an intermediate price and win both. 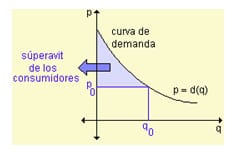 The consumer surplus is given by the area between the curves p = d (q) and p = p 0 then its value may encounter a definite integral as follows:

Solving the integral, the profit of consumer’s results:

The consumer gain is $ 320 if the level of sales is twenty units.

In the same way if some manufacturers were willing to provide a product at a lower price than the price p 0 of balance. So the total differences between the equilibrium price and the lowest prices at which manufacturers sell the product is considered. Actually as an additional input for manufacturers and is called the producers’ surplus. 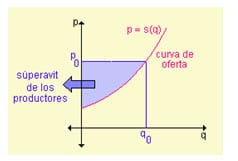 If s (q) is a function of supply with price p 0 balance and offer q 0 of balance, then

It is known that the supply curve for a product is s (x) = . Find the profit of the

Calculate excess supply and excess demand for given demand and supply curves.

The excess supply and demand are represented by the areas shown in the graph: 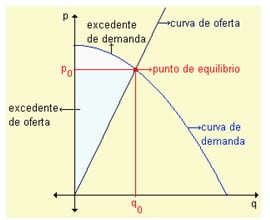 Since the values of the abscissa corresponds to the number of items offered or demanded, q 0 = 20. Therefore, p 0 = 840.

The derivative and consequently the whole, have applications in business and economics in the construction of the marginal rates .

It is important to the economists this work with the marginal analysis because it allows calculating the point of maximization of utilities.

In order for this method to be applied to profit maximization, the following conditions must be met:

We give some important definitions for our work:

It is the extra cost you get to produce and sell one more unit of a product or service.

It can also be defined as the limit value of the average cost per extra item when this number of extra items tends to zero.

We can think of marginal cost as the average cost per extra item when a very small change in quantity is made.

We must take into account that if c (x) is the cost function, the average cost of producing x items is the total cost divided by the number of items produced. 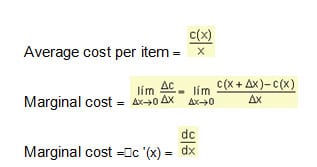 The marginal cost measures the rate at which the cost increases with respect to the increase of the quantity produced.

It is the additional income that is achieved by selling one more unit of a product or service.

It is that gets a company is given by the difference between their income and costs. If the input function is r (x) when x items are sold and if the cost function is c (x) when these same articles are produced, the utility p (x) obtained by producing and selling x items is given by p x) = r (x) – c (x).

The derivative p ‘(x) is called marginal utility and represents the utility per item if production suffers a small increase.

Solve the following issues and check the answers.

For a particular item, the marginal revenue function is i ‘(x) = 15 – 4x. If x units are demanded when the price per unit is p pesos:

We assume that during the first five years that a product was put on the market the f (x) function describes the sales ratio when x years passed since the product was first introduced on the market.

The purchase of a new machine is expected to generate savings in operating costs. When the machine has x years of use the savings ratio is f (x) pesos a year where f (x) = 1000 + 5000x.

It will take 5 years for the machine to pay for itself.