Home » What are the Main Functions of Central Bank?

To understand what are the main functions of the central bank, firstly we should know about what a central bank is? Every country of the world has its own central bank for resolving all the monetary and credit problems in the country. We can define the central bank as “Central bank is an institution, which is charged with the responsibility of managing the expansion and contraction of the volume in the interest of the general public welfare”. 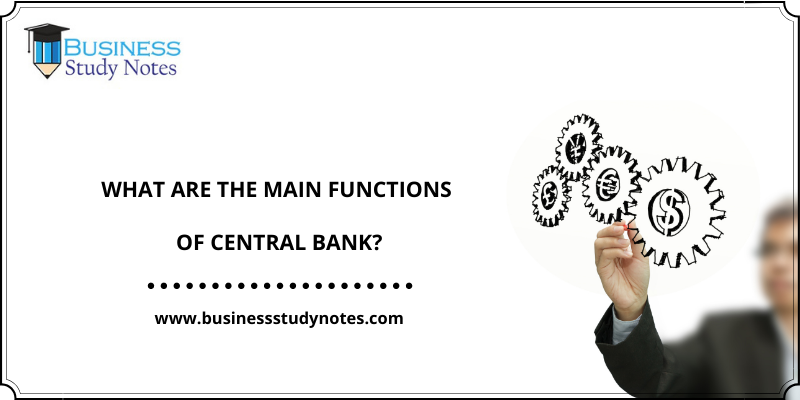 The primary functions of the central bank are given below in details:-

Another most important function of a central bank is that it acts as a banker to the state or government. It accepts cash deposits and cheques of the government and other incomes of the government like taxes etc and provides cash requirements for payment of salaries, wages and for their expenditure.

It maintains the account of government. No interest is paid on the cash balance of the government maintained by the central bank.

The ratio of cash reserve can be changed by the state bank if required according to the situation. Maintenance of cash reserve also helps in the process of credit control in the country. Against this reserve, the central bank helps the member bank in discounting their bill of exchange and supply of cash in financial hardships and other requirements.

The central bank helps them either by advancing loans or by discounting bill of exchange held by the commercial banks. This is also one of the important functions of the central bank.

Similarly, credit performs the important functions of supplying money in the modern economy. The value of money is influenced by the volume of credit. The volume of credit in the country is regulated for economic stability. This regulation of credit by the central bank is known as monetary policy or credit control. Controlling credit is also one of the important functions of the central bank.

The central bank of the country also acts as a clearinghouse for the remember banks. A clearinghouse is a place where the representatives of commercial banks meet to exchange cheques drawn on each other and then settle the difference owed to the other.

It may also be defined as an association of banks to facilitate the exchange, off-set and settlement of credit claims among them and to serves their mutual interest. As every commercial bank keeps a certain percentage of the cash deposits with the central bank, the settlement of inter-bank obligations becomes easy by the simple process of book entries.

With the help of a clearinghouse, the payments and receipts of large amounts become convenient and secure without involving any cash. The advantage of this system is not only to secure a large amount of payments without risk, loss of time and use of precious metal, but this facility also enables the central bank to carry on the monetary policy of the country more effectively. Clearinghouse is no doubt is also from one of the important functions of the central bank.