Home » Explain the Essentials and Types of Promissory Note.

A promissory note is a simple kind of instrument of credit in which the debtor himself makes a promise to his creditor to pay the amount of money at the promised date. To make this document legal, the revenue stamps are affixed according to the value of the promissory notes. 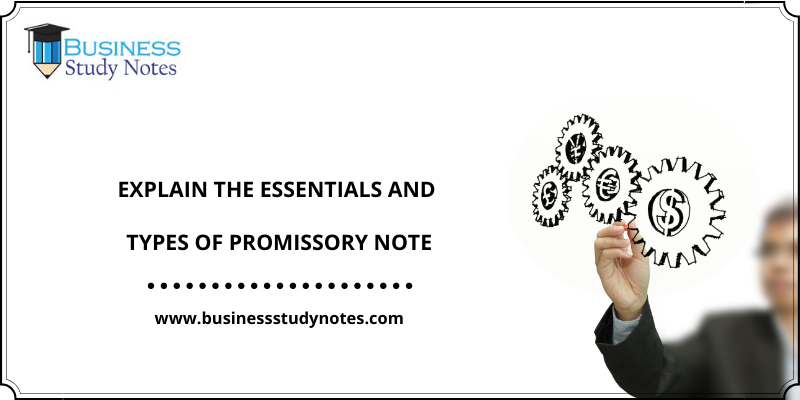 We can define promissory notes as “An instrument which can be in written shape by making a promise to pay a specific amount on demand at a fixed date and time or unconditional order of a certain person or to carrying of the instrument”.

There are two parties to a promissory note;

The person who makes the promissory notes to pay the amount stated therein is called the “Maker of Promissory Note”.

The person to whom the note is payable unlike other instruments, in promissory notes. Drawee receives the amount of the instrument.

There are two main types of promissory notes which are as under;

In this kind of promissory note, the maker and the Drawee belong to the same country. The inland note may be individual or joint notes.

In foreign promissory notes, the maker and the Drawee belong to different countries and also is an individual or joint note.

How to Create Promissory Notes?

The following essential steps are required to write promissory notes, which are as under;-

The word “promissory note” must be there in the instrument and show the way of verbal communication.

There must be at least two parties in creating promissory notes i.e.

It is essential to mention a particular principal amount in the instrument.

It is also necessary that the interest rate should be fixed and shown in the instrument.

The date of disbursement must be fixed and shown in the instrument.

It is also essential that both parties are agreed upon terms & conditions, which is fixed through mutual consent.

Promissory notes must be signed by the maker.

Difference Between Promissory Notes and Bill of Exchanges

It is usually held by the payee and is a promise to return back money, which is borrowed through a loan by mutual consent of both the parties’ borrowers and lenders. It is a completely different element from the Deed of Trust. The loan is always active to the whole time until the note hold by the lender. At the time of loan paid as it is written or “Paid in full” then it returns to the borrower.