The concept of price elasticity measures the amplitude of the variation of a variable when it varies another variable on which it depends.

This is applied to the demand and supply curves to measure the variation of quantity demanded or offered as a result of variations of the variables that determine them.

Elasticity of Demand and Supply

Following are the complete details of Price Elasticity in Demand and Supply with examples.

Consider the demand for tennis rackets. At the price of 100 Euros, 10,000 rackets are demanded. If the price goes up to 120 Euros the amount demanded drops to 9,000 units.

More from Business Study Notes:-  What is Economy

The elasticity of demand for tennis rackets is 0.5 (-10% / 20%, although the result is negative elasticity is usually expressed with a positive sign).

This means that, given a variation of the price, the amount demanded varies by half in percentage terms.

According to the value of the elasticity one can speak of: 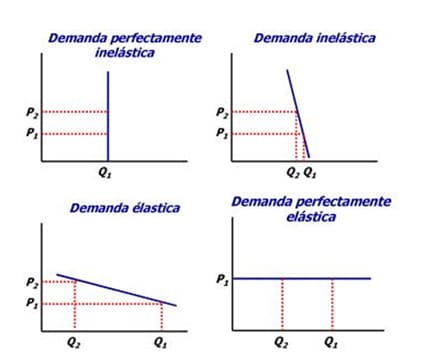 It can be observed in the previous graphs that the more inclined the demand curve is, the lower its price elasticity.

The elasticity of demand is not the same throughout the curve. But also as the slope of the curve the elasticity-price also varies. 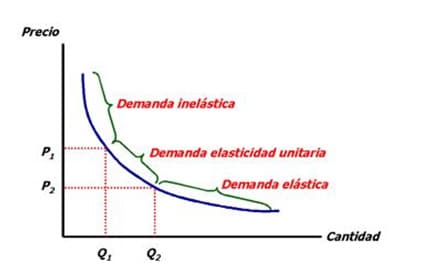 Factors that Determine that a Demand is Elastic or Inelastic

A) Well needed versus fine luxury. The necessary goods usually have an inelastic demand. Their demand oscillates little in the face of price variations (people will continue to buy that good because they need it).

For example, bread is a necessary commodity and presents a very inelastic demand. Even if it increases its price (within certain limits) the vast majority of families will continue to buy the same amount of bread.

On the contrary, the demand for luxury goods tends to be very elastic. By not being necessary goods the consumer can do without them at any given time. This determines that their demand reacts intensely to price variations.

For example, pleasure cruises. If your price goes up considerably many people will give up and look for an alternative type of vacation. On the other hand if its price low the demand will fire.

When there are no substitute goods nearby demand is usually more inelastic.

For example, milk does not have a close substitute, presenting an inelastic demand, even if its price raises people will have no choice but to keep buying milk.

For example, if the price of gasoline goes up, the consumer will have to keep filling the tank of vehicle. So, the amount demanded will not suffer in the short term a great variation.

In the long term, the situation changes, many consumers when it comes to renewing their car will choose one with a diesel engine, which will drop gasoline demand.

Economic Value of Transactions and Price Elasticity of Demand

The economic value of transactions is equal to the total amount paid by buyers for their purchases and perceived by sellers. It is calculated by multiplying the price by the quantity purchased.

For example, if 100,000 televisions are bought annually and the average price is 300 Euros, the economic value of these transactions will be equal to 30 million Euros. The elasticity of the demand curve influences how this economic value varies with a price variation.

If the demand is inelastic (the quantity varies little in the face of price variations), an increase in price leads to an increase in economic value (equal to the shaded area), and a decrease in the opposite price.

The income elasticity of demand measures the magnitude of the variation of the quantity demanded before a variation in the income of the consumer.

Income elasticity of demand = Change% of quantity / Variation% of income

The goods are classified in:

A lower good can be a poor quality food product: when the rent increases the consumer instead of purchasing more of that good replaces it with a higher quality one.

The necessary goods usually have low income elasticity. The consumer tends to buy the amount he needs irrespective of whether his income goes up or down.

Luxury goods tend to have high income elasticity. So, their demand varies markedly with variations in consumer income.

Its operation is similar to the elasticity of demand.

Consider that the computer market is in balance, with an annual supply of 200,000 units at an average price of 1,000 Euros.

The strong demand pushes up the price by 10 percent, which causes that the offer increases to the 250,000 computers (percentage variation of 25%).

Depending on their elasticity, the supply of a market can be classified into: 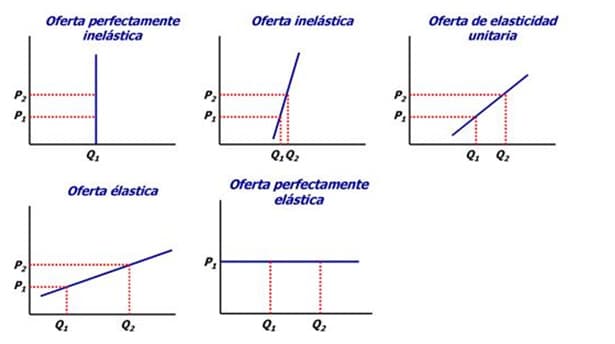 As can be seen, supply is elastic when the quantity offered is very sensitive to a price variation and is inelastic when it barely fluctuates.

An example of elastic offer is that of rural houses. If you increase the price of accommodation many owners will decide to condition their second homes as rural houses, while when the price goes down some rural houses stop offering.

On the other hand, an example of an inelastic supply is that of oil since the wells are at full capacity and it is very difficult in the short term to increase production, however much the price rises.

As we saw with demand, the elasticity of supply tends to vary along its curve. The elasticity tends to be higher in the lower area of the curve. Where the quantity offered is small and lower in the upper curve.

The elasticity of supply will depend largely on the time horizon to be analyzed:

This allows the offer to fluctuate against price variations. Although, this determines that the supply curves tend to be very upright in the short run, while in the long run they tend to be less steep.

For example, the supply of apartments on the coast for the summer is inelastic in the short term. However, in the long term the offer can be varied.