The Elasticity of Demand | Definition & Formula:- There are some goods whose demand is very sensitive to the price, small variations in its price because large variations in quantity demanded. They are said to have elastic demand. Goods that, on the other hand, are not sensitive to price are those of inelastic or rigid demand. In these can produce great variations in the prices without the consumers vary the quantities that demand? The intermediate case is called unitary elasticity. 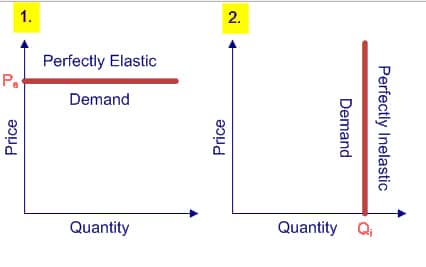 The elasticity of demand is measured by calculating the percentage by which the quantity demanded of a good varies when its price varies by one percent. If the result of the operation is greater than one, the demand for that good is elastic; if the result is between zero and one, its demand is inelastic.

Factors Influence the Elasticity of Demand

The factors that influence whether the demand for a good is more or less elastic are:

1) Type of needs that satisfy the good. If the good is of first necessity the demand is inelastic, it is acquired whatever the price; However if the good is luxury the demand will be elastic since if the price increases a little many consumers will be able to do without it.

2) Existence of substitute goods. If there are good substitutes the demand for the good will be very elastic. For example, a small increase in the price of olive oil can cause a large number of housewives to decide to use the sunflower.
3) The passage of time. For almost all goods, the greater the period of time considered, the greater the elasticity of demand. It may be that by increasing the price of gasoline, its consumption does not very much, but over time it may be replaced in some of its uses by coal, in other uses by alcohol, so that the decrease in demand only it shows when time passes.

4) Importance of the good in terms of cost. If the expenditure on that good supposes a very small percentage of the income of the individuals, its demand will be inelastic. For example the pencil, Variations in price influence very little the decisions of consumers who wish to purchase them.

5) The price. Finally we have to take into account that the elasticity of demand is not the same along the whole curve. It is possible that for high prices demand is less elastic than when prices are lower or upside down, depending on the product in question.

The concept of income elasticity is used to measure the sensitivity of goods to changes in the income of individuals: the percentage of the quantity demanded of a good varies when the consumer’s rent varies by one percent. In the case of the inferior goods, the income elasticity is negative since the increase of this causes the contraction of the demand of those. The income elasticity of luxury goods is very high since the variations in income because large variations in the quantity demanded. The necessities, unlike inferior goods, have the income elasticity of demand positive but very small, in other words, demand is inelastic with respect to income. Finally, normal goods will show a unit income elasticity, that is, their demand will increase approximately in the same proportion as the income of individuals.As we saw earlier, when an individual’s income increases, his consumption of all goods will increase as well. However that is not always true. There are some goods, so -called inferior goods, which are characterized by the fact that the increasing income of individuals decreases consumption of them. The classic example is that of potatoes or, in general, that of foods rich in starches. As the income of individuals and societies increases, these foods are replaced by others rich in protein, meat, for example. There are other goods, on the other hand, whose consumption increases more than proportionately as incomes increase. They are luxury goods.

The relationships that exist between goods allow another form of classification. They are called complementary goods that are consumed together: cars and gasoline, canaries and cage. The peculiarity of these goods is that when increases the price of one decreases the quantity demanded of the other. The opposite phenomenon can be observed in the case of substitute or substitute goods, which can be used alternatively: olive oil and sunflower oil. In this case the increase in the price of one causes the increase in the quantity demanded of the other.

To measure the sensitivity of the demand for one good to the variations in the price of another, the cross-elasticity is used: the percentage in which the quantity demanded of one good varies when the price of another varies by one percent. The cross elasticity will be positive if the variations in price and quantity demanded go in the same direction, that is, in the case of substitute goods.