The budget line formula shows all possible combinations of goods that consumers can purchase if exhausted their entire budget on such property.

The decision of the consumer as to the set of goods they want to purchase for consumption is determined by two factors:

The disposable income sets a limit on the spending capacity of the consumer, who can consume at most the amount of his income.

The budget line formula represents all possible combinations of goods that the consumer can acquire if he exhausts his entire budget.

The Equation of Budget Line Formula

The equation of the budget line formula depends on the income of consumers and the prices of goods.

The marginal rate of substitution Market is the rate at which the consumer can trade one good for another without altering the amount of money spent.

The rising price of one of the real causes the budget line formula to rotate to the left – down and the budget is set lower. The value of the straight line varies (since the relative price of the two goods changes).

The cut-off point with the axis of that good whose price has not changed remains constant. However, the cut-off point of the goods whose price has increased is close to the origin. If the price of one of the goods is reduced, it causes the budget line to rotate to the right-up. Hence, the budget is set to increase. The value of the line also varies (since the relative price of the two goods changes). When there is a simultaneous variation of prices and income, the budget subtraction shifts and changes the slope and in turn the budget set.

In a delimited period of time, the consumer has a certain amount of money that he can devote to consumption. Your rent can be biweekly, monthly, yearly. Given this amount of money, which we will call R, the subject must decide what goods to consume. We will continue to assume that the choice focuses on only two goods. So, to find out how the money destined for consumption is exhausted. Basically, we need to know, besides the rent, the prices of the goods. The given income and prices, the sets of goods that the consumer can access are given by the following restriction:

When we study consumer preferences, the proposed model is for the choice between two goods. There we made the proviso that one of the goods is a specific good eg. clothes. Also, the other was a composite good that encompassed the whole Rest of the goods. When we study the budget constraint we maintain this approach, then we can say that the good X is the demand for consumer clothing. Where, the good Y represents everything else that the consumer wants to acquire, in addition to clothing.

It is useful to suppose that the good Y is the money that the consumer can spend on the consumption of other goods. Automatically, we have that the Py will be equal to 1, since the price of a monetary unit is a monetary unit. Then we can write the budget constraint as follows:

In the two-dimensional space, we can represent this restriction using Figure 1. 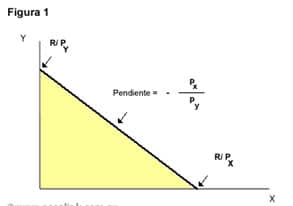 If we order formula (3), we can express the budget constraint in such a way as to show the consumption of a good according to the prices. Although, prices include both goods and the quantity consumed of the remaining goods. In this way we have the expression:

Then, given the prices (Px, Py) and income (R). The budget constraint is drawn as a straight line with negative slope that tells us the relation to which the market replaces the good Y for the good X.

Changes in the Budget Restriction

The function presented in the previous section depends on the prices of the goods (Px, Py). The consumer income (R), and then the changes in the function will be a product of changes in these given variables.

If rent (R) is modified, then it is a parallel shift of the budget constraint. If the rent increases the restriction will move to the right, if it contracts, the restriction will shift to the left. This indicates that, given the prices, an increase in consumer income implies that the latter will have the possibility of acquiring more of both goods. If we look at the intercept and the abscissa at the origin, in Figure 2 we see that both are shifted to the right. So, the amount the consumer could purchase good X or Y is greater good in both cases. We must emphasize that the rate at which the two goods are replaced in the market has not changed. 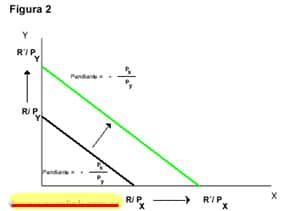 Thus we see in Figure 3 , how the restriction to an increase in the price of good moves X. It can be seen that the intercept is unchanged. However, it decreases the amount that can be purchased for good X if all income is destined to its consumption. For this reason the abscissa in the origin moves towards the left. When prices change, the taste replacement market changes. 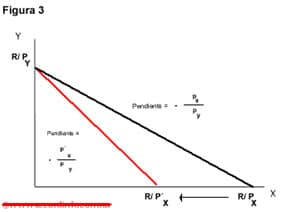 We can think about how the budgetary restriction will be modified in the face of economic policy measures such as taxes, subsidies and rationing.

The tax is applied on the value of the property , that is, about the price of goods. Thus we have that if the price of good X is Px and a tax on the amount of sales, the price paid by the consumer becomes Px (1+ applies t ). That is, the bidder pays Px and Px * t to the state.

Subsidies on the quantity and value of the asset affect income and prices in a manner analogous to a tax, but in the opposite direction.

Another way to apply a policy can be through a tax (or subsidy) of fixed rate. This means that the State takes a fixed amount of money regardless of the quantities consumed. In graphic terms, this translates into a parallel shift of the budget constraint to the left (to the right if it is a subsidy).

Finally, we can name another policy measure known as rationing. The rationing consists of establishing the maximum amount that the individual can acquire. In graphic terms we can see in Figure 4 how the budget set is changed. The individual can consume all those combinations such that the amount of X is less than X max. 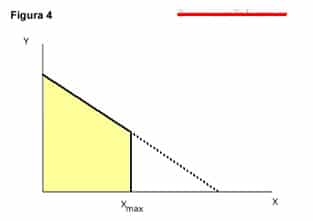