Home » What Are The Types Of Project Selection Models?

There are certain types of project selection models that are used to select the projects. The selection of projects is an important part of the business. If you choose the wrong project, this may go to lose instead of giving business benefits. 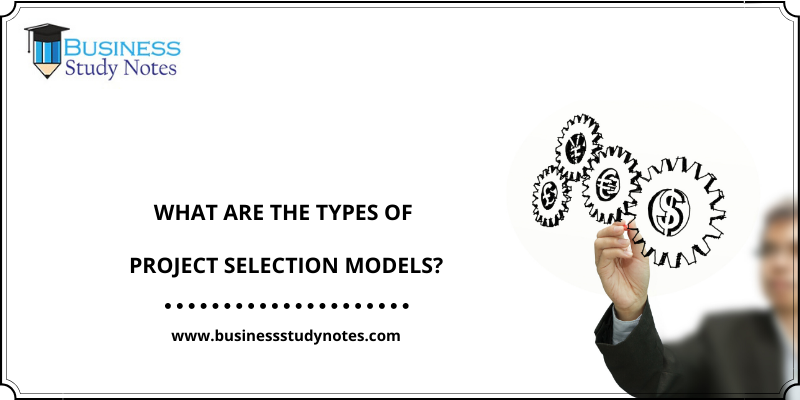 Following are the types of Project Selection Models:

Non – Numeric project selection models have further 6 types, which we need to discuss in detail.

The senior and he powerful official in the company suggest the project in this case. Mostly the project is simply initiated from an apparent opportunity or chance which follows an un-established idea for a new product, for the designing & adoption of the latest information system with universal database, for the establishment of a new market or for some other category of project that demands the investment of the resources of the organization.

The project is created as an immediate result of this bland approach for investigating whatever the boss has proposed. The sacredness of the project reflects the fact that it will be continued until ended or until the boss himself announces the failure of the idea & ends it.

If a plant is threatened by the flood then it is not much complex and effortful to start a project for developing a protective desk. This is the best example of operating a necessity. Potential projects are evaluated by using this criterion of project selection by the XYZ steel corporation.

In the late 1960s, XYZ Steel considered an important plant rebuilding project by using this criterion in its steel bar producing facilities near Chicago. It was clear to the management of the company that certain modernization is required in its bar mill in order to keep the current competitive position in the market area of Chicago.

Perhaps the project has a modern planning process, the desire to keep the competitive position of the company in the market provide a basis for making such a decision to carry on the project. Similarly, certain undergraduate and Master in Business Administration (MBA) programs are restructured in the offerings of many universities to keep their competitive position in the academic market.

Precedence is taken by the operating necessity projects over competitive necessity projects regarding investment. But both of these types of project selection models are considered much useful & effective as compared to other select models.

In case of the product line extension, a project considered for development & distribution of new products will be evaluated on the basis of the extent to which it suits the company’s current product lines, fortify a weak line, fills a gap, or enhanced the line in a new & desirable direction.

In certain cases, careful evaluations of profitability is not needed. The decision-makers can perform actions on the basis of their belief about the probable influence of the addition of the new product to the line over the entire performance of the system.

There is no formal method of selection of projects in the organization but it is the perception of the selection committee members that certain projects will benefit the company more than the others even they lack the suitable way to specify or measure the proposed benefit.

For all sorts of projects, if not a formal model, the concept of comparative benefits is enormously used for selection decisions. United States Companies considering various social programs for providing funds to them to use this concept to make the decisions.

All the considered projects with positive recommendations are examined by the senior management of the funding organization in order to make an effort to develop a portfolio that can effectively suit the objectives & budgets of the organization.

The Q-Sort model is one of the most straightforward techniques for ordering projects. According to their relative merits, the projects are first divided into three groups which are Good, Fair and Poor. The main group is further subdivided into the two types of fair-minus and fair-plus if any group has more than eight members.

The projects within each type are ranked from best to worst when all types have eight or fewer members. Again relative merit provides the basis for determining the order. The specific criterion is used by the rater to rank each project or he may merely use general entire judgment. 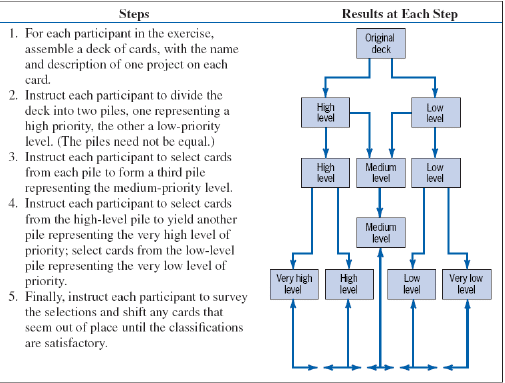 One person has the responsibility to carry out the process for evaluation & selection of the project. In certain cases, there is a selection committee for performing such a process. If the task is handled by the committee, individual ranking can be built anonymously and the committee examines the set of anonymous rankings for consensus.

These ranking differ from to some degree from rater to rater but that difference is not much enhanced because the selected individuals for such committees seldom differ increasingly on their consideration for the suitability for the parent organization.

Finally, the projects are selected on the sequence of preferences, though they are generally assessed on a financial basis before final selection. There are certain other non-numeric models for rejecting or accepting projects.

The profitability is used as the only measure of acceptability by the majority of organizations using different types of project selection models. The following are some of the numeric models for project selection.

This method supposes that the cash inflows will die-hard to the minimum extent to pay back the investment, and any cash inflows outside the payback period are ignored. This method also functions as an inadequate representative for the risk. The company faces less risk when it recovers the initial investment fast.

The ratio of the average annual profit (either after or before taxes) to the average or initial investment in the project is referred to as the average rate of return. It is mostly misunderstood as the reciprocal of the payback period.

None of the two above mentioned evaluation methods are effective for project selection, though the payback period is frequently used and exhibits reasonable value for decisions related to cash budgeting. These two models have a major advantage in the shape of simplicity, but none of them cover the important concept of the time value of money.

The discounted cash flow method is also called the Net Present Value (NPV) method. The net present value of all cash flows is determined by discounting them by the required rate of return in this method.

Where k = the required rate of return,

Ft = the net cash flow in period t and

In order to cover the effect of inflation in the equation

Where pt is the forecasted rate of inflation during the period t.

A simple example will be adequate. Suppose a project has an initial investment of $100,000. It has a net cash inflow of $25,000 per year for a period of eight years. The required rate of return for the project is 15% with an inflation rate of 3% p.a. Now the NPV of this project is calculated as below

The value of k is ascertained by trial & error.

The models just explained have different variations that fall into the following three groups: