Home » What Is A Project? What Are The Characteristics of Project?

Characteristics of Project: A problem scheduled for a solution is called a project. The gap between the current position and the desired position is referred to as a problem and there may present some hindrance that precludes the convenient movement to fill the gap.

The project is composed of a set of activities that should be carried out to obtain certain objectives in a certain time and certain locality. In other words, the temporary effort made to develop a unique product, service, or result is said to be a project.

Project is referred to as an investment on which resources are employed to make assets that will generate benefits over a wide period of time. Project is a unique process that contains a group of coordinated and controlled activities having beginning & end dates and these activities are performed to accomplish certain objectives in the light of some requirements including time, resources and cost constraints.

Characteristics of Project in Project Management

The following are some of the important characteristics of the project.

The following are four types of projects.

These projects have both poorly defined project end requirements and project methods.

On the basis of duration, the following are further two types of projects.

They are less sophisticated and need limited project management tools. It is not difficult to get approval, organizational support and funding for short-range projects. For example, minimize fault in the shop no 3 from 7% to 4%.

A high level of risk is present in long-range projects and suitable feasibility analysis is required before beginning such a project. Long-range projects are mostly cross-functional projects. The internal, as well as the external environment of an organization, is influenced by these projects. Potential resources are needed to consider such projects by taking effective initiatives by the members.

Reasons for Initiation of Projects

In the following scenarios, projects are initiated

Attributes of a Project

In comparison with the program, a single goal is focused on the project. The end results affect the customers. These projects should be finished within a specified budget & time frame and in the light of the specifications.

In short, the projects are

All the projects are planned and executed in an economic, social, political, environmental and international context.

This environment includes how people are affected by the project and how they in turn affect the project. This needs comprehension of demographic, economic, ethnic, religious, ethical and cultural sensitivity issues.

The understanding of international, national, regional, or local customs and laws is covered in this area. Furthermore, certain other factors are also included like teleconferencing facilities, time zone differences, national holidays, level of technology usage and travel means & logistic requirements.

The knowledge about physical geography and local ecology is included in this kind of project environment that can influence the project or influenced by the project. 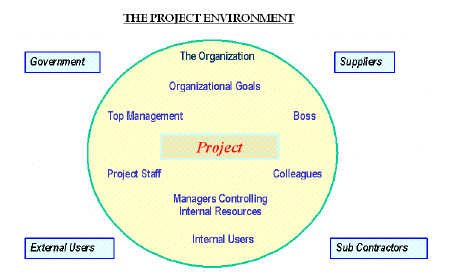 They have different levels of authority and responsibility so they should not be neglected. The project manager must attempt to accomplish & manage the expectations of the shareholders. Both negative and positive stakeholders are present.

So it is quite beneficial for the project management team to point out stakeholders by ascertaining their expectations and requirements so that these can be better managed to make the project successful.

The following are some of the main key stakeholders of the project.

The individual who has the responsibility to manage the project is considered as a project manager.

Customers or end-users are those persons or organizations that will utilize the product of the project.

The performing organization is the one whose employees are most directly participate in performing the project work.

These include the team members who are participating directly in the activities of the project management.

The group that is doing the project work is considered as project team members. It contains the members who are directly participating in the activities of the project.

The person or group that supplies financial resources for the project in cash or any other kind is referred to as a sponsor.

People or groups that although does not involve directly in the project but can indirectly influence the project positively or negatively are called influencers.

Project management organization can be included in the performing organization where it acts as a stakeholder by taking responsibility for the results of the project. 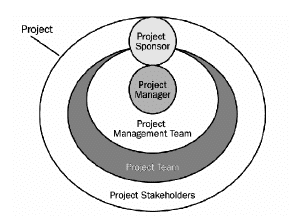 Projects are mostly split into more manageable components which are called subprojects. The single subproject is also itself a project and is managed in the same sense. They can be outsourced or subcontracted.

Examples of Characteristics of Project

The following are some of the practical examples of the projects.

Projects are unique & temporary and are performed by teams that have

Following are some of the common characteristics between projects and operations