In order to clarify the sensitive effect of change in sales over ROE, some terms need to be cleared first.

The amount of sales at which operating revenues completely equal the operating costs is the break-even point. Also breakeven is that point at which the EBIT (Earnings before Interest & Taxes) = 0.

From an accounting perspective operating costs are a combination of fixed costs and variable costs.

Q = Quantity or No. of units sold of product

It is obvious that at break-even point: EBIT = 0

Also it is stated before that,

The above derived equation shows the minimum No. of units that the organization should sell. Actually in order to equal its operating costs. It is clear that the change in sales has drastic effects similarly change in break-even will also have great effects.

The following diagram depicts the sensitive effect of little change in sales over ROE. 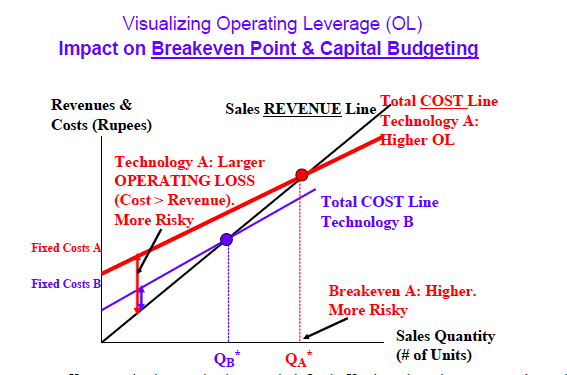 The operating leverage is graphed in the above diagram. The sales quantity in No. of units is represented on x-axis while revenues and costs (RS) are represented on y-axis. The line that originates from the origin shows sales revenue (PQ). There are two cost lines drawn representing different technology. Therefore the coastline of technology A is higher one which represents higher operating leverage. Moreover technology B cost line is lower but its slope is higher. Hence the above mentioned graph provides two important points.

Also the organization that has a higher percentage of fixed costs has high risk for operational losses. Particularly irrespective of the higher or lower sales. That is the reason for consideration of certain businesses, companies, technologies and projects with higher operating leverages. So as much as risky ones having more chances to bear operational losses. However because of their higher fixed costs which are unavoidable. Although the higher operating leverage exhibits larger reduction in EBIT as shown in graph.

Application of OL to Capital Structure 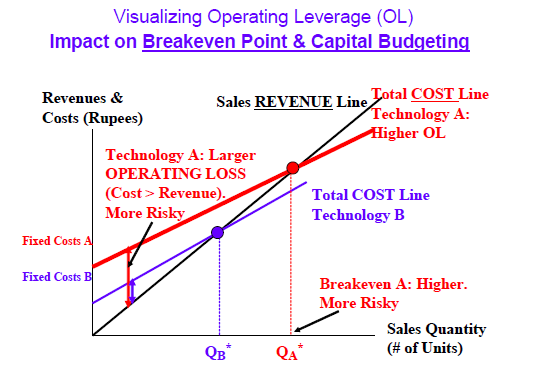 On x-axis ROE is graphed while on y-axis probability is shown. Two probability distributions are shown one on the left side with a tall and sharp peak. Actually that corresponds to technology B having lower operating leverage. So the risk and average ROE for technology B is lower. Moreover, the technology A is represented on the right side of the graph with lower peak and flat shape having higher operating leverage. The risk and average ROE is higher. Therefore the WACC is also higher for technology A with a higher required rate of return.